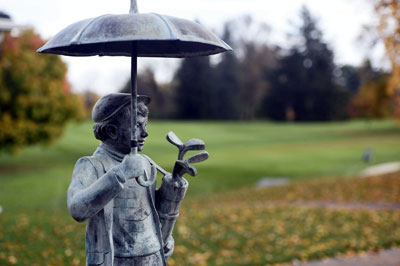 Chambersburg Country Club is one of Franklin County's premier private clubs. The Club is proud of its championship 18-hole golf course, versatile 25,000 square foot clubhouse, and wonderful pool and tennis facilities. Located less than a mile from interstate 81 and within an hour's drive Harrisburg, Carlisle, Hagerstown & Frederick we are in an ideal area for all type of functions.

The Clubhouse stands on the grounds that have been known as the Chambersburg CC for over 90 years. The facility is extremely flexible and able to accommodate groups of all sizes. Banquets, meetings and special events can be hosted at the Club year round without the requirement full membership. The Country Club boasts an 18-hole facility that has been host numerous USGA U.S. Open qualifiers, state and local championships.

Our tennis complex is one of the area's only Har Tru outdoor locations. With full lighting available, tennis can be played almost any time of the day or night for our membership. The swimming pool is also a hot spot of summer action. Complete with a diving board, kiddie pool, sandbox, full locker facilities and a snack bar it is the perfect location for a summer afternoon with the family.

Aside from our championship 18-hole golf course complete with four sets of adult tees & two sets of junior tees the Club has a great practice facility. A green grass practice tee with a practice fairwary bunker, short game area with bunker & green complex, & stand alone practice putting green complete the practice facilities where you can improve your game. More over our instructional program is complete with an active junior program, family golf nights, clinics, private instruction and a full calendar of events.

Highlighted by one of the area's best instructional programs, the pool is the place to be any time during the summer season. The pool is complete with lifeguard stations, kiddie pool and a great snack bar. Near the pool is a fun area for the family to play basketball on the full length courts or Frisbee golf. The parking area is adjacent for easy access to your vehicle.

Evolvement of the Course:

In late 1920, a group of business men in Chambersburg decided that the area needed and could support a golf course. One of the men, Mr. M.K. Burgner owned land near Scotland and agreed to lease a portion of his land to the group for a golf course. A formal Board of Directors was formed, memberships were solicited and acquired, and in 1921 the first six holes of the golf course were constructed.

A description of the first six golf holes, circa 1921.

HOLE NO. ONE:
The tee box was close to where the current bag drop stand is currently located. The hole of about 300 yards played across what is now Hole No. 10 fairway and the green was in the indented area to the left of No. 10 fairway. There were shallow bunkers on either side of the green.

HOLE NO. TWO:
No. Two tee was reached by a path though the woods that traveled to the right and part way up the current No.  Ten fairway. The correct drive on this hole was back across the current No. Ten fairway, to an area just to the right of a wooded area extending from the Club House. The fairway was a sharp dogleg to the left and the green lay in a wooded area between the current cart paths adjacent to the kitchen. There were also two bunkers in front of the green that had to be navigated.

HOLE NO. THREE:
The green for this hole was the current practice green in front of the cart barn. There were shallow bunkers on either side of the green. A large tree branch extended over the green. No. Three tee box was rather long, offering shots from 120 yards to 140 yards and was located on the current Club House side of the driveway.

HOLE NO. FOUR:
The tee for this 200 yard par three was located at the lower end of the parking area. The tee also backed up to the fence line of the houses along Old Scotland Road. Along the right side of the fairway was a travel lane that leads to the Steinberger house. This structure remains to this day and is used as out ‘Tennis House’. Players had to navigate ‘out of bounds’ to the right where a peach orchard was located. The green was approximately where the tennis courts are currently located.

HOLE NO. FIVE:
The tee for the fifth hole was located in front of a stand of pine trees along the back edge of the current practice range. The best tee shot was to the right of the wooded hill down range from the practice area. To reach the green, the player had to travel up and to the left, leaving a blind shot to the green over the hill.   A large stand of pine trees lined the entire right side of the fairway, with an apple orchard on the right side which was  considered out of bounds.

HOLE NO. SIX
This hole still remains as out current finishing hole. There was a fenced lane that crossed the fairway just short of the fairway bunker on the right. Steps allowed golfers to cross the fence. An above ground waterline also had to navigated, its’ origin was the Scotland School’s well. Accommodations were made allowing the School Commandant golfing privileges.

In January 1923, the Board felt there was sufficient interest in the Club to add three additional golf holes. Membership increased from fifty to seventy-five members and a Golf Professional was hired. The membership was polled, and additional land was leased from M.K.Burgner. Mr. Thomas Danachie was hired as the Golf Professional. Addionaly, Mr. Danachie supervised the construction of Golf Holes Seven through Nine.

NEW HOLE NO. SIX:
This hole is our current No. Eleven. There was a fence along he left side of the fairway/ green, thus a wayward shot in the left direction was not only out of bounds but also lost in very deep weeds across the fence line.

HOLE NO. SEVEN:
This hole is our current No. Sixteen, however the tee box was at the back of the pond. In turn this hole was a long 570yard uphill Par five.

HOLE NO. EIGHT:
Constructed in 1923 but now in use as our Seventeenth golf hole, a 480 yard par five with the green situated approximately where the center fairway bunker resides. The green originally was quite small, elevated with two bunkers in front and steep. Any shot left, right, or long, left a difficult approach shot. The Board made a local rule that any shot from either No. Seven or No. Eight that resulted in the adjoining fairway could be dropped without penalty in the ‘rough’ of the proper hole being played.

HOLE NO. NINE:
Due to the new construction of Hole No. Six, the existing Sixth hole was used as the Ninth hole to complete the course. The course was first played in 1924 as a nine hole golf course.

*The course scoring record on the 9 hole course was held by Dick Schlichter. Mr. Schlichter carded a 29, Scoring eight 3’s, and a 5. The 5 was carded on #7.

In 1948, the Club bought the ‘Lesher’ farm from the Steinberger family. This farm lay beyond the Seventh hole ( now our Sixteenth hole) and to the south and west of the Conococheague Creek and opened the possibility for expansion of the golf course. By 1954, the Club membership had increased and there was interest in new construction of additional golf holes. By 1955, financing had been arranged and Wm.P.Gordon, Golf Course Architect was hired to lay out the new course. The plan included the abandoning of the original holes No.1, 2, 3, and 4. A description of the new holes will follow keeping in mind that the term ‘ original’ will reference the completed Nine Hole Course.

HOLE NO. ONE:
This was a new hole, currently played as our Tenth hole.

HOLE NO. TWO:
This was an existing hole, No. Six was built along with holes Seven, Eight and Nine. Currently it played as our Eleventh golf hole.

HOLE NO. THREE:
This was an existing hole, number Seven on the original course. Now our Sixteenth hole, while being played from the tee box behind the pond.

HOLE NO. FOUR:
This was a new hole and is currently golf hole number Two.

HOLE NO. FIVE:
This was a new hole and is currently golf hole number Three.

HOLE NO. SIX:
This was a new hole and is currently golf hole number Four. Originally the ponds in front of the green were a single pond that extended the full width of the fairway. A concrete bridge provided travel over the water. However the bridge was damaged and subsequently replaced by altering the fairway and creating two bodies of water.

HOLE NO. SEVEN:
This was a new hole and is still played to date. However, two sets of tee’s exist, the front tee was played one round ( first nine ) and the back tee played on the second round of nine holes ( back nine ). The back tee is 235yds.

HOLE NO. EIGHT:
This was an existing hole, number Eight on the original course and our current Seventeenth golf hole. This hole was designed as a Par 4. Teeing off, followed by a second shot up the hill on the left to the original number Five green. This proved to be unpopular and thus the targeted green is the original Eight green.

HOLE NO. NINE:
This was an existing hole and is currently our number Eighteenth golf hole.

By 1973 a number of events came together to make an Eighteen Hole Golf Course a possibility and perhaps a necessity. The Club membership had grown significantly and the nine hole course was overcrowded. Scot-Greene had purchase the Steinberger orchard and was willing to sell a section of land to the Club. The Club had also acquired a parcel of the ‘Poe’ farm that lay east of the Conococheague Creek. The Board of Directors contracted Edmund Ault, Ltd., Golf Architects to prepare a course layout on the property available to the Club. In June of 1973 the Ault group presented their recommended layout. It is noted in the original proposal that proposed layout would make golf hole number Five a Par Three. Locating the tee box near the woods on the left of the current golf hole.

A membership meeting on 25 July 1973, a motion proposing the purchase of the Scot-Greene land and going forward with the expansion program presented. The motion was defeated. In August 1974, the financing for the proposed expansion was completed. Five local banks loaned $510,000. At a special meeting of the membership on 15 August 1974, the proposal was approved. The following January 1975, at the annual meeting the proposal was reconfirmed. As soon as the weather permitted, work on the new construction commenced.

By June 1976, the new course was in play. Hole number Five had been made a Par 4 ( as we currently play ). Hole number Sixteen played as a Par 5 from a tee box behind a pond, while hole number Seventeen continued to be played as a short Par 5 to an elevated green.

In September of 1976 hurricane Eloise caused damage to holes number Twelve and Fifteen as well as the approaches to the bridge over the Conococheague Creek between 12 and 15. The necessary repair work was done and the course was quickly in play.

In 1999, the tee box for golf hole number Sixteen was relocated to its current location and was to be played as a Par 4. Golf hole number Seventeen was lengthened and a new green was constructed.